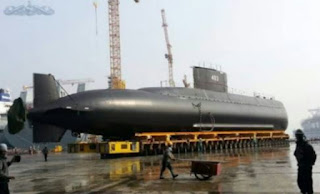 Defense Minister Song Young-moo discussed the issue when he met with his Indonesian counterpart Ryamizard Ryacudu in Seoul later in the day, according to his office.

He’s on a trip to South Korea to attend a delivery ceremony for a submarine built by the local defense contractor Daewoo Shipbuilding & Marine Engineering Co.

It has signed a separate deal to buy South Korea’s T-50 supersonic trainer jets in addition to a bilateral partnership on Seoul’s KF-X program to develop its own advanced fighters.

Also on the agenda was North Korea, it added.

“The ministers expressed deep concerns about North Korea’s nuclear and missile threats that are increasing recently and discussed ways for close coordination,” it said.

Meanwhile, the ministry stated that it would step up efforts to develop the defense industry as one of the nation’s next growth engines in tandem with the fourth industrial revolution.

The reform-minded Song, a former naval chief, believes the local defense industry is too dependent on domestic demand.

It has called for an export-oriented strategy.
Sumber