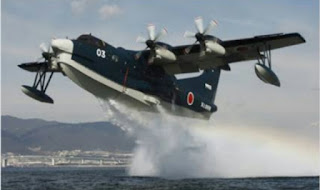 Japanese aerospace company ShinMaywa has confirmed that it is prepared to distribute work on the US-2 aircraft with local companies, should it be selected for Jakarta’s amphibious search-and-rescue (SAR) requirements, but played down the option of a final assembly in Indonesia.

Speaking to Jane’s at the MAST Asia 2017 exhibition in Tokyo, Masayuki Tanaka, from ShinMaywa’s export division, confirmed that the company is prepared to make concessions for technology transfers in line with Jakarta’s defence acquisition policies.

However, he noted that these will depend ultimately on the Japanese government, which is taking the lead on the potential deal. The Indonesian Armed Forces (Tentara Nasional Indonesia: TNI) is reportedly considering an initial contract for three US-2 aircraft.

Although there are several options to distribute work on the platform, it is logistically very challenging and expensive to transport major aircraft components to be assembled in Indonesia, said Tanaka, who posited that such an arrangement could end up costing the customer a lot more.

It could be more feasible for the aircraft to be delivered fully assembled with final configuration works to be done in the customer’s country, he added, naming Indonesian state-owned aircraft manufacturer PT Dirgantara Indonesia as a possible partner in the collaboration.

However, Tanaka was not able to give any indication as to when a deal for the US-2 is expected to materialise, adding only that talks between the two governments are ongoing.
Sumber

Garuda Militer - November 9, 2018 0
Mekatronik 81mm mortar, a weapon with autoloader much appreciated by its users (Army Recognition)The Indonesian army is both happy s electric and proud to...