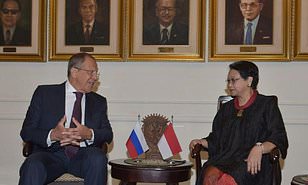 Indonesia and Russia pledged Wednesday to strengthen cooperation in cyber-security and counter-terrorism as concern grows about the spread of radicalism in Southeast Asia.
Russian Foreign Minister Sergei Lavrov, who is on a two-day visit to Indonesia, said the two countries would work together more closely to counter the spread of Islamic State (IS) ideology.
“The threat that the ISIL is has not vanished. Its members have been spreading all over the world, including areas close to the Russian and Indonesian borders,” Lavrov said, using another acronym for the group.
Hundreds of radicals from Indonesia have flocked abroad to fight with IS, and the country has seen a surge in plots and attacks linked to the jihadists over the past year.
Indonesian officials have also said dozens of Indonesians have travelled to the southern Philippine city of Marawi to fight with militants loyal to IS.
The militants seized parts of the city over two months ago and have resisted all attempts by the Philippine army to evict them.
“We have agreed that our special services will pay particular attention to increasing coordination in our joint efforts to fight this scourge,” Lavrov said.
Indonesian Foreign Minister Retno Marsudi said the two countries had strong ties on political and defence issues, and Indonesia wanted to deepen trade ties.
The ministers also discussed tensions on the Korean peninsula, the South China Sea and conflict in the Middle East, but gave no details.
Sumber
BACA JUGA :  DPR-Pemerintah Sepakat Beli Satelit Pertahanan Negara