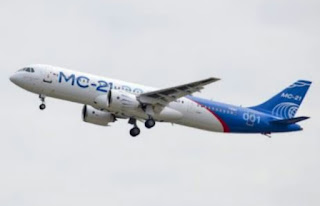 Russia hopes its newly-designed passenger liner MC-21 will be in good demand on Indonesia’s market. As Russian Foreign Minister Sergey Lavrov said, a special center for MC-21 maintenance and repairs may be set up in that country.

“We expect that MS-21 will be in demand on Indonesia’s booming market and provide the optimal solution for establishing reliable transport links between individual islands of the Indonesian archipelago,” Lavrov said at a presentation of the Irkut company’s passenger liner in the Indonesian capital on Wednesday.

Lavrov said Irkut was prepared not only to provide planes for Indonesia, but also to launch “diversified scientific, technical and industrial cooperation with the local Indonesian partners.” He added that such cooperation would be immune to the influence of time-serving political factors.

Indonesia’s Transport Minister Karya Sumadi said he was certain the Russian plane would be in demand on his country’s market and urged Indonesia air carriers to consider the possibility of acquiring it.

Lavrov said MC-21 was “an embodiment of progress in Russian aircraft engineering and building observed in recent years.” It was created on the basis of unique cutting-edge ideas and solutions in engine manufacturing, electronics and composite materials and 3D printing and was superior to its foreign counterparts by a number of parameters.

Lavrov pointed out that contracts had already been concluded for 175 MC-21 planes and preliminary agreements for another 250 ones.

MC-21 is a medium-haul aircraft being developed by the United Aircraft Corporation (of which Irkut is an affiliate). It will come in two configurations: MC-21-200 (seating 132 to 165 passengers) and MC-21-300 (capable of carrying 163 to 211 passengers). Currently work is in progress only on MC-21-300. At the end of last May it performed its maiden flight. The first planes are scheduled for delivery at the end of 2018.
Sumber

Gugun Satria - September 7, 2017 0
Ilustrasi  Japan is undertaking efforts to deepen understanding of the defence industrial capabilities of Indonesia and India, with a view to pursuing military technology...