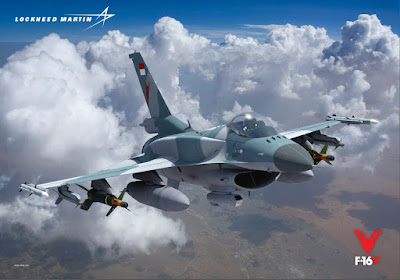 The disclosure of the India plan, however, does show that Greenville isn’t the only place where the defense contractor plans to fill any future orders for the 40-year-old jet.

It also shows that Greenville won’t be filling the biggest potential future order and the only real hope of keeping the F-16 program alive, according to one aerospace analyst.

Lockheed disclosed the India plan on Monday at the Paris Air Show as part of its bid to capture an expected contract from the Indian government that reportedly would involve the purchase of up to 200 single-engine fighter jets.

Lockheed said it would make the latest generation of the F-16 in India — assuming it wins the contract — as part of a partnership with the aerospace and defense arm of Tata Group, the big Indian conglomerate.

Lockheed spokesman John Losinger told UBJ that the India plan doesn’t change what the company previously said about filling future F-16 orders from the 16-hangar facility in southern Greenville County where it has refurbished military aircraft since 1984.

Losinger said Lockheed is pursuing F-16 sales to Bahrain, Indonesia, and other foreign countries, and the Greenville facility would perform final assembly for those orders if they come to be.

The Trump administration has reportedly informally notified Congress that it approves of Lockheed selling up to 19 F-16s to Bahrain, but a formal, public notice has not yet been issued.

Losinger said Lockheed hopes to nail down the sale to Bahrain by the end of this year or early next year.

He said the potential F-16 sale to Indonesia remains a subject of talks between the Asian country and the United States. He declined to give a number of aircraft on the table in that potential deal.

Losinger also said the Greenville facility would assemble some of the initial aircraft sold to India if Lockheed wins that contract.

As it waits to finalize future F-16 business, Lockheed expects to fill the last remaining order for the fighter — a sale to Iraq — by the end of the year at its factory in Fort Worth, Texas.

After that, the company will begin an 18-month process to move F-16 assembly to Greenville, but only once it nails down another order, Losinger said.

He said Lockheed agreed to make the F-16 in India because that is widely expected to be a requirement of any sale of the jet to the Indian government.

The letter of intent that Lockheed unveiled in Paris also provides for India to export Indian-made F-16s, which means India could be competing with Greenville for any work to upgrade about 3,200 F-16s currently in use by various countries, Losinger said.

Richard Aboulafia, an analyst with Teal Group, an aerospace consultancy in Fairfax, Va., said the F-16 is “on its last legs” and he doesn’t expect Greenville to make many of the supersonic jets.

“The F-16’s only real hope for a sustainable line is an India order, and that means building in India,” Aboulafia said in an email to UBJ from Paris.

Lockheed’s deal to make F-16s in India with Tata was “an inevitable agreement, and Greenville was always going to be an interim site, at best,” Aboulafia said. “Perhaps the Bahrain planes will be built [in Greenville], and conceivably a few others.”

Lockheed’s local complex, however, remains a potential location for assembly of a different supersonic military aircraft.

Lockheed has said it would perform final assembly of the South Korea-made T50A in Greenville if it wins a contract to supply 350 jets to the U.S. Air Force for training fighter pilots.

Lockheed Martin is competing with a Boeing/Saab alliance for that multibillion-dollar contract, as well as an Italian company called Leonardo.