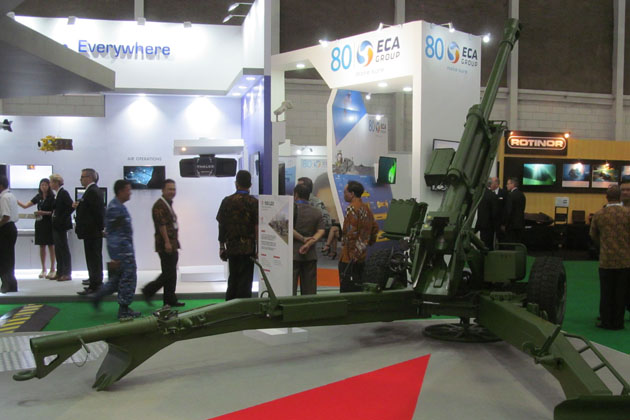 The company has already delivered 20 to the Indonesian Marines. LG1 fires 105mm rounds and is marinised so that it can be used in a naval environment.

A spokesperson from Nexter said that the Indonesian Army may be interested in buying the gun as well because it is a lightweight system weighing just 1,550kg that can be easily deployed by medium helicopters like the Bell 212 and SA 330 Puma.

LG1 can fire 12 rounds per minute and can be brought into action in 30 seconds if an optional inertial navigation system is included that allows the gun to be brought into action faster because it removes the need for a geographic team to calculate the location and surrounding terrain before LG1 can be used.

He said the army already has 105mm guns but that these are old and will need to be replaced. LG1 can be crewed by a few as three soldiers and has a Top-Lite ballistic computer.

Nexter is also offering improved ammunition that can extend the range from about 11km using exsiting M1 rounds to more than 15km with Nexter Munitions’ hollow base and base bleed projectiles.

Nexter has already sold the LG1 to Thailand, which has 18 systems and to Singapore and the company expects to sell more in the South East Asia region. Other LG1 customers include Belgium, Canada and Colombia.