Home Alutsista Indonesian Marines Build Up
New tropicalised variants of the BTR-4M 8×8 armoured vehicles are due to be received this year by the Indonesian Marine Corp (Korps Marinir) from Ukraine.

This will add to the formation’s amphibious vehicles such as the 54 BMP-3F IFVs in its inventory and other armoured units.

In an archipelagic nation of 13,000 plus islands, the marine corps plays an important role in defending Indonesia. Under navy authority, the corps is composed of two groups (three battalions each) and one independent brigade totalling 20,000 personnel. 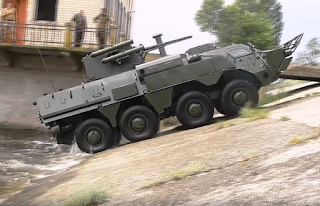 Other BTR-4Ms possess a simple turret mounting a 12.7mm machine gun. Indonesia’s order was for 55 amphibious vehicles, which will replace the elderly BTR-50 and supplement the BTR-80A, since most of the latter are used in Lebanon for peacekeeping.
BACA JUGA :  [Foto] Konsep Simulator Kapal Selam

In June-July, marine personnel received training on this new equipment that fires 122mm rockets. The RM-70 Vampir is an upgrade of the standard RM-70, with modernisation work conducted by Czech company Excalibur Army. 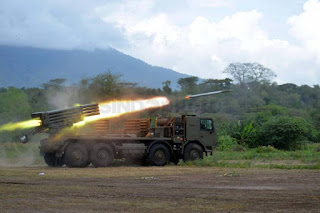 The rocket launcher is mounted on a Tatra T 815-7 8×8 chassis. Operated by a four-man crew, the launchers are interconnected with a digital fire control system. Vehicles are ready to fire within 2.5 minutes of arriving at a firing point, and the ready-to-fire pod of 40 rockets can be fired singly or in salvoes. The truck also carries a second rack of 40 rockets that can be manually reloaded within a minute.
BACA JUGA :  [Foto] Cope West 17 di Manado

Indonesia is producing R-HAN 122B rockets locally, with successful testing of an improved version occurring in August 2015. This rocket type was developed by a consortium from Dahana, Dirgantara and Pindad, as well as various government agencies. 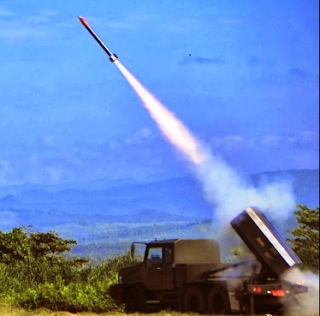 The R-HAN 122B is 2.81m long, powered by a hydroxylammonium nitrate rocket motor with a burn time of three seconds. This gives a 30.5km range for the rocket, which has a 15kg warhead.

Along with the MRLs, Indonesia received one battalion command vehicle, two ammunition resupply vehicles, a recovery vehicle and fuel tanker. Also part of the contract were two Alligator 4×4 armoured vehicles and a Tatrapan T 815 6×6 APC from Slovak manufacturer Kerametal. Indonesia obtained nine second-hand, older-generation RM-70s from the Czech Republic in 2003, so the military is already familiar with the system. 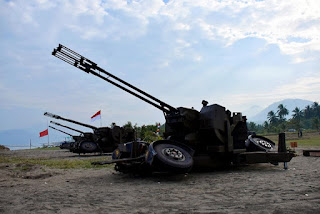 The first test-firing of the system against UAVs occurred on 12 August after delivery occurred in July. Further orders could follow.