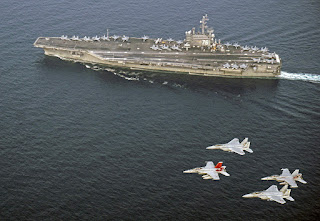  
The Indonesian Navy has confirmed that two US navy vessels that entered Indonesian waters off Natuna Islands in Riau Islands province in June did not breach any regulations.

The vessels, the aircraft carriers the USS Ronald Reagan and the USS George Washington, “conducted innocent passage and thus there was no problem with it,” Navy deputy chief of staff Vice Adm. Achmad Taufiqurrahman told The Jakarta Post.

A source at the Navy previously revealed that the USS Ronald Reagan and the USS George Washington entered Indonesian waters in the Malacca Straits without permits, fueling suggestion that their presence was related to the effort to quell Islamic State group activities in the southern Philippines.

On June 14, the USS Ronald Reagan entered Natuna waters and flew a F22 Raptor and chopper in the region. The operation was then voided by the Indonesian Navy.

After the KRI Sultan Hasanuddin shadowed and communicated with them [officers from the USS Ronald Reagan], [the ship] changed direction and left Indonesia’s territory,” the source told the Post on Friday.

On June 21 at around 9:29 a.m., the USS George Washington crossed near the Philips strait in the northern part of Batam, heading toward the South China Sea.