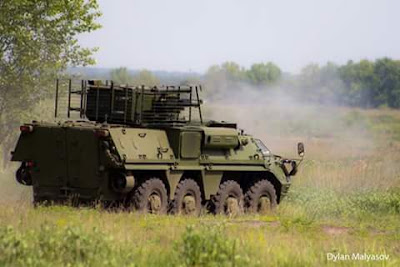 “The handover of new Ukrainian armoured personnel carriers BTR-4M to military units of the Indonesian Marine Cops has been completed. So, from early May, among other machines, Indonesian Marines are serving on BTR-4M. Before that, our APCs have successfully passed the trials in Indonesia and proved their  excellent amphibian capabilities, shooting accuracy from different types of weapons and very good driving performance in mountainous terrain”, – said Pavlo Barbul.

Shall be recalled, that delivery of 5 armoured personnel carriers BTR 4-M, which are produced at Ukroboronprom’s Kharkiv Morozov Machine Building Design Bureau, was successfully completed within the framework of the contract, signed between the SE SFTE Spetstechnoexport and the Ministry of Defence of Indonesia in 2014.

Before accepting into operation, the Ministry of Defence of Indonesia conducted trial tests of the Ukrainian armoured personnel carriers in the territory of their country. Following the results of those tests, a Protocol was signed on performing functional tests. The special committee of the Ministry of Defence of Indonesia has confirmed, that Ukrainian made APCs comply with all 47 evaluation specifications of this Protocol
Sumber

Gugun Satria - September 13, 2017 0
Inzpire is delighted to announce that, in conjunction with our in-country partner PT Kadomas Aviasindo, we will provide our GECO Air tablet-based mission system...