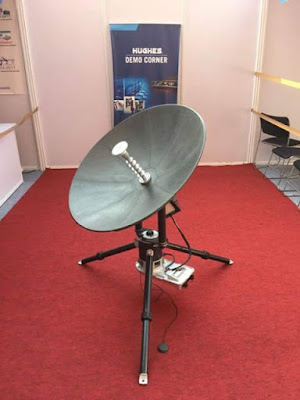 Wayne Marhefka, Hughes Defense senior director of business development, told Jane’s in a recent interview the company saw an opportunity for the HM500 terminal after a meeting with an Indian military signal corps commander who expressed a desire for an easy-to-use, lightweight terminal that weighs 15 kg or less. The terminal, weighing less than 14 kg without batteries, is dramatically lighter than automatic pointing terminals that Marhefka said can weigh 100 kg or more.

Marhefka said he returned to India six months later with an operational terminal. Not only did he perform the demonstration for the India military official, but he said the terminal has performed another 20 demonstrations for various military users. Marhefka said Indonesia, Malaysia, and Singapore have also expressed interest in a terminal similar to the HM500.
Sumber