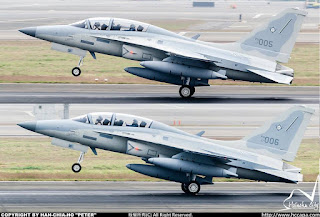 The 1st and 2nd FA-50PHs arrived in November 2015, while the 4th and 3rd arrived a year after. The remaining six aircraft on order are expected to be delivered within this year.

The FA-50PH has a top speed of Mach 1.5 or one-and-a-half times the speed of sound and is capable of being fitted air-to-air missiles, including the AIM-9 “Sidewinder” air-to-air and heat-seeking missiles, aside from light automatic cannons.

It will act as the country’s interim fighter until the Air Force gets enough experience in operating fast jet assets and budget allocation for more capable fighter aircraft.

[World] Another F-35 Stealth Jet Caught on Fire While Starting Its...

Gugun Satria - August 29, 2017 0
Lockheed Martin Aeronautics Co., Fort Worth, Texas has been awarded a $47,819,931 requirements contract for engineering and technical services in support of the F-16...