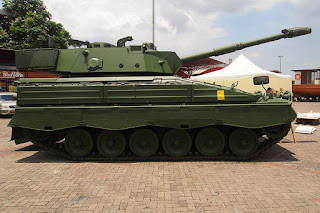 The Marder 1 infantry fighting vehicle (IFV) was in production for the German Army between 1971 and 1975 and the latest 1A5 IFV will remain in service for some years. The company has already sold surplus upgraded Marder 1A3 IFVs to Chile and Indonesia. The Medium Tank RI is essentially an upgraded Marder 1A3 platform fitted with an Italian Oto Melara (today Leonardo) HITFACT three person turret. The most significant improvement to the platform is the raised roof line to provide more internal volume, upgraded MTU diesel engine, which now develops 690hp, upgraded suspension for improved mobility, and a modular armour package. 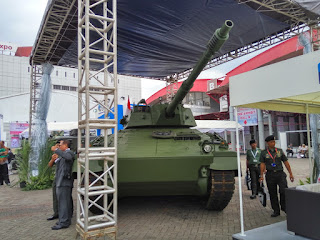 The HITFACT turret is armed with a 105mm rifled gun fitted with a thermal sleeve, fume extractor, muzzle brake and muzzle reference system. A 7.62mm machine gun (MG) is mounted co-axial with the main armament and if required, a 7.62mm MG could be mounted on the roof. HITFACT is a well-proven turret and is already installed on the Centauro (8×8) mobile gun system currently deployed by Italy, Jordan and Spain. The turret is fitted with a computerised fire control system (FCS) coupled to stabilised commander’s and gunner’s sights, which both have day/thermal channels and a laser rangefinder. 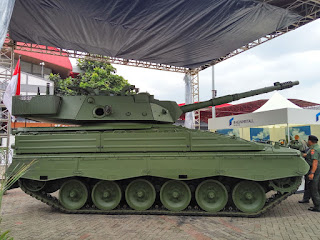 The Marder Medium Tank RI would not engage other main battle tanks; its primary role is to support mounted and dismounted infantry using its 105mm gun, which can fire a wide range of ammunition natures.

Rheinmetall believes that its Marder 1 Medium Tank RI is a cost-effective solution for Indonesia, because vehicles could be delivered about two years after contract award and the Indonesian Army is already familiar with the basic Marder 1A3 platform.

The same upgraded platform used for the Marder 1 Medium Tank RI is also used for other applications and has been shown in the armoured personnel carrier (APC) configuration fitted with a Kongsberg remote weapon station (RWS) armed with a .50 M2 HB MG.