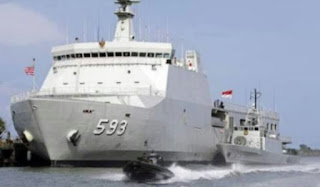 The Indonesian Navy is finalising parameters for a seventh landing platform dock shipVessel is projected to be the most complex LPD yet, given its secondary role as a command ship

The Indonesian Navy (Tentara Nasional Indonesia – Angkatan Laut, or TNI-AL) is in the process of outlining requirements for a seventh landing platform dock (LPD) ship, and is expected to request a sum of about USD72 million from the government for this acquisition, sources from the service’s headquarters in Cilangkap confirmed with Jane’s on 18 September.

This information has since been corroborated with an official from shipbuilder PT PAL in Surabaya, who confirmed that the company is in discussions with TNI-AL for a seventh LPD, but emphasised that a formal contract for the platform has yet to materialise. “The LPD is similar to the five vessels [already in fleet] and the one under construction, but it will be more complex”, the official told Jane’s , without giving further details.

PT PAL laid down the keel for the sixth vessel in Surabaya on 28 August. The platform is based on a design by South Korea’s Dae Sun Shipbuilding and Engineering. The shipyard had previously constructed two similar platforms, KRI Banjarmasin (592) and KRI Banda Aceh (593), for the TNI–AL in-country.

Three earlier ships in the class, KRI Dr Soeharso (990), KRI Makassar (590), and KRI Surabaya (591), were built in Busan, South Korea by Dae Sun, with officials and engineers from PT PAL understudying the construction works under a knowledge transfer agreement. Dr Soeharso is currently operated by the TNI–AL as a hospital ship.
Sumber : Janes