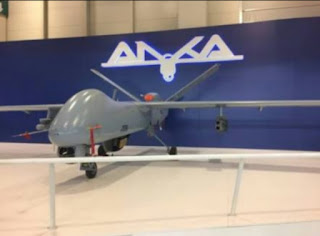 Drone or unmanned aerial vehicle Medium Altitude Long Endurance (MALE) nationally developed by Indonesia has a flying endurance of up to 24 hours with a roaming range of 5,000 km of continuous operation.

The initial needs of this aircraft are intelligence, monitoring and surveillance missions and will continue with defense needs with armed combat missions.

“The aircraft is expected to be armed so that it can perform the initial action, so that this aircraft can fulfill the mission set by the user that is TNI AU [Indonesian Air Force]. Of course the development will be done gradually,” he said.

This unmanned aerial vehicle is entirely made by Indonesian sons, so it is hoped that this product can reduce Indonesia’s dependence with foreign products in the field of supervision.

The development of this program is carried out by The Agency for the Assessment and Application of Technology (BPPT) together with the Ministry of Defense, Bandung Institute of Technology (ITB) as a university partner, PT Dirgantara Indonesia as aircraft manufacturer which will perform integration and commercialization as well as PT LEN which will develop control and load system.

The unmanned aircraft developed in 2015 is planned to be produced in 2022 and used by the Indonesian Air Force for 11 bases of drones in order to improve the security of the state especially the areas of border, terrestrial and waters which are prone to security hindrances
Sumber : Netralnews