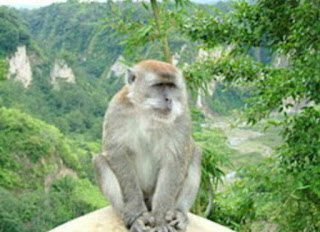 A district in central Indonesia has invited the army, police and local hunters to help battle bands of wild monkeys which are raiding plantations and attacking villagers, the district head said Friday.

“With the invasion of hundreds of these monkeys, we allow shooting clubs to help overcome this problem by hunting them,” Boyolali district chief Seno Samodro told AFP.

Monkey attacks on local residents remain a problem, and officials are trying to find long-term ways to resolve the problem.

They have tried spray-painting a captured monkey before release, which caused the other monkeys to reject the painted animal — who later died.

But this method of culling the population was deemed too slow and ineffective, Samodro said.

The monkeys steal fruit and corn from villagers’ plantations and have bitten 11 people so far this year.

Indonesia’s dry season may have caused food scarcity in the forest where the monkeys usually live, forcing them to raid plantations in search of food.

One of the hunting clubs involved in the latest effort, the Indonesian Snipers Association, said it had sent about 10 people daily from nearby towns to help with day and night patrols of the villages.

But Kristanto, a sniper who uses a Pre-Charged Pneumatic (PCP) air rifle, said hunting for the macaque was not easy in the circumstances.

“We saw the monkey today, but as we looked at the target through our telescope, the residents chase the monkey down with bamboo, so there goes our target,” he told AFP.
Sumber