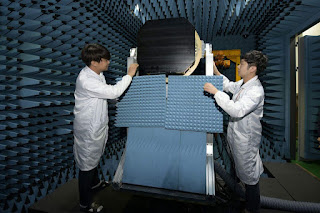 South Korea’s Defense Acquisition Program Administration (DAPA) on Thursday unveiled a prototype of an advanced radar for its homegrown fighter jet project, demonstrating the radar’s initial capabilities amid the military’s efforts to complete the development of the fighter jets by 2026.

The state-run Agency for Defense Development conducted various tests to ensure capability of the mock-up version of the active electronically scanned array radar system at a research institute in Yongin, Gyeonggi Province, run by Hanwha Systems, a local defense firm and a civilian contractor for developing AESA.

Among the test conducted were AESA’s detection capabilities. With a 120-degree detection range, AESA acquired mock-up targets by transmitting electronic wave. Consisting of about 1000 modules, AESA is able to detect a target as small as a one-meter-long object, according to ADD officials.

Our current goal is to figure out what kinds of risk we will face,” an official from Defense Acquisition Program Administration said under the condition of anonymity. “We will verify our capability through upcoming flight test. If there is no issue, we will be good to go.”

Known as a crucial equipment to stealth fighters, AESA allows aircraft to remain stealthy by sending out signals that are spread out across a band of frequencies and are difficult to detect over background noise. The radar also allows the fighters to engage in electronic warfare to evade radar detection.

According to the DAPA, AESA will be flight-tested on a prototype fighter jet for Korean Fighter Experimental program, or KF-X, whose development is scheduled to be finished in 2026. The fight test will take place in 2022, DAPA added.

The 18.1 trillion won ($15.7 billion) KF-X project seeks to produce 120 fighter jets with domestic technology and deploy them at the South Korean Air Force by 2032. They will replace the older F-4 and F-5 jets currently in service.

South Korea had decided to develop its own AESA radar system after the US rejected its request to transfer core technologies to be applied to the KF-X jets in 2015. The technologies included the AESA radar, radio frequency jammer, electronic optics targeting pod, and infrared search and track system.

But the controversy persists whether South Korea would manage to develop AESA without the help of overseas contractors. DAPA signed a 400 billion won deal with Israeli contractor Elta Systems for technical supports on the radar’s transmitting and receiving devices and among others.

DAPA reiterated that although it would receive “technical supports” from overseas contractors, AESA’s hardware and software — such as algorithms for missile detection capabilities and radar-evading system — would be developed on its own.

“Throughout the process, there would be certain phases where we get technical support, if necessary. But there will be no overseas involvement when we mount the radar on KF-X fighters for a flight test,” DAPA official said.
Sumber