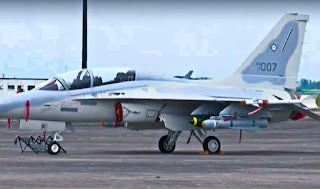 This was evidenced by FA-50PHs aircraft displayed during the 70th anniversary celebration of Air Force held today in Clark Air Base.

One of the celebration’s highlight was the presentation of certificate of complete delivery for 12 FA-50PH ‘Fighting Eagle’ Fighter/Surface Attack/Lead-in Fighter Trainer (F/SA/LIFT) aircraft.