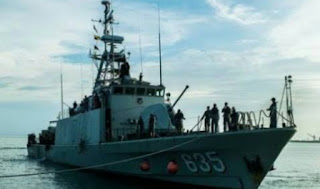 The Department of Justice has ordered the National Bureau of Investigation to investigate the disappearance of four Indonesian Navy personnel who were escorting Filipino fishermen they accosted in December 2016.

Justice Secretary Vitaliano Aguirre II issued an order to investigate the disappearance of the Navy personnel, who were last spotted near the maritime border between the Philippines and Indonesia.

“People do not just disappear,” Aguirre said in a statement. “When people suddenly disappear without any explanation it becomes a serious matter that should be investigated.”

The Navy personnel were escorting Filipino fishermen who had encroached into Indonesian waters in the North Sulawesi area last December.

The Filipino fishermen were aboard the FB Nurhana, which was approached by an Indonesian Navy vessel. The 21 crew members were detained in Bitung, Indonesia.

The four Navy personnel disappeared while escorting three of the Filipino fishermen to Talaud Island in Indonesia, aboard the Filipinos’ fishing boat.

“If a crime is committed relative to such disappearances, the responsible persons must be held accountable,” Aguirre said. “We need to get to the bottom of this.”
Sumber