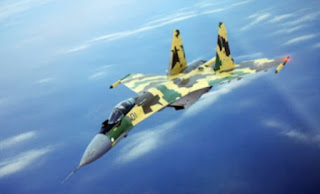 Russia and Indonesia launched negotiations over the draft Su-35 contract in March, a
senior Russia’s Federal Service for Military-Technical Cooperation (FSMTC) told Sputnik at the time. The Su-35 fighter was developed by Russia’s Sukhoi Company aircraft manufacturer between 2003 and 2008. It was first introduced to a foreign audience at the 2013 Paris Air Show as a “4++generation” heavily-upgraded derivative
of the Su-27 multirole fighter.
Sumber