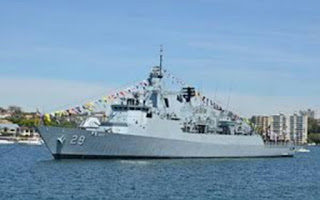 There were no injuries or casualties in a fire incident involving the Royal Malaysian Navy (RMN) KD Jebat warship, docked at the naval base here early this morning.

Royal Malaysian Navy (RMN) chief Admiral Tan Sri Ahmad Kamarulzaman Ahmad Badaruddin said that based on preliminary information, the 2.30am fire broke out at a galley area while the personnel were busy preparing the ‘sahur’ (pre-dawn meal).

Swift action by Navy personnel enabled the fire to be fully brought under control at 5am helped by a team of firefighters from Lumut, “ he said in a statement.

Ahmad Kamarulzaman said the Navy would set up a board of inquiry to investigate the cause of the accident as well as the damage and losses incurred.

KD JEBAT is Lekiu-type guided missile frigate and commissioned on Nov 10, 1999, and currently assigned to the Western Fleet Command at the RMN base in Lumut
Sumber