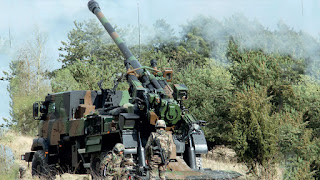 The Indonesian Army programme to update its conventional artillery capability with the acquisition of new systems with greater range and accuracy is well under way. Nexter Systems of France has now delivered 37 CAESAR 155mm/52 calibre self-propelled (SP) artillery systems based on a Renault Trucks Defense Sherpa (6×6) cross-country chassis to the Indonesian Army. They are deployed with two regiments – each has 18 systems, plus there is one for training.

In addition to being deployed by Indonesia, CAESAR is in service with France (77), the Saudi Arabian National Guard (136) and Thailand (six).

More recently, Nexter Systems has developed a CAESAR in an 8×8 configuration, which uses a Tatra chassis. This has a higher level of mobility, an increased ammunition supply to 30 x 155mm projectiles and associated charges, and a projectile ammunition handling system to reduce fatigue.