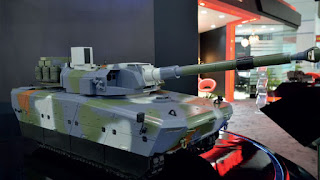 The MMWT is being developed for the Indonesian Army and two prototypes are being built, one in Turkey and one in Indonesia – both to be completed in 2017.

It is fitted with a Belgian CMI Defence two-person turret armed with a 105mm rifled gun that is fed by a bustle-mounted automatic loader with a 7.62mm machine gun mounted co-axial with the main armament. The 105mm gun can fire a wide range of ammunition.

To enable stationary and moving targets to be engaged with a high first round hit probability, a computerised fire control system is installed; the commander and gunner are both provided with stabilised day/night sights incorporating a laser rangefinder. The commander is provided with a panoramic sighting system to allow for hunter/ killer target engagements to take place.

The powerpack is a high-performance diesel engine coupled to an electronically controlled automatic transmission and a cooling system to allow the MMWT to operate in high ambient temperatures.

FNSS is quoting a maximum road speed of 70km/h, a cruising range of up to 450km and a power-to-weight ratio of 20hp/tonne with a gross vehicle weight of around 35 tonnes.

The baseline hull is of all-welded steel armour to which an appliqué armour package can be fitted for a higher level of ballistic protection.

Under-belly mine protection is fitted, as is a fire detection and suppression system. Standard equipment includes an air-conditioning system, cameras for situational awareness and an auxiliary power unit that allows all the key subsystems to be run with the main diesel engine switched off.

The role of the MMWT is not to engage more heavily armed and protected main battle tanks but to engage lighter threat vehicles such as reconnaissance platforms, infantry fighting vehicles, troop carriers and combat support vehicles.

It can also be used to support dismounted infantry in the direct fire role, with the 105mm gun being used against pill boxes and other battlefield obstacles. Its light weight and low profile allow it to be deployed in areas that cannot be accessed by traditional MBTs that today normally weigh well over 70 tonnes.